Remember that show on MTV Pimp my Ride? It was the one where the rapper Xzibit would take someone's beat up car, have it restored, then customized to the Nth degree. Think of this as my version of Pimp my Ride. We're going to vary the show a bit because my Blue Triad SL bicycle was anything but beat up to start. In fact, it was brand spanking new. So we'll jump straight to how I pimped my ride this year. Here I have it race-ready. When I train, I take off most of the bells and whistles. I think it's better to train with the slower equipment then race with the fastest.

Here is my Blue Triad SL with the 2014 paint scheme of the matte carbon along with the electric blue lettering. I love it's look. It's equipped with electronic Shimano 9000 Di2 groupset. This is the first time I've had electronic shifting. I absolutely love it. 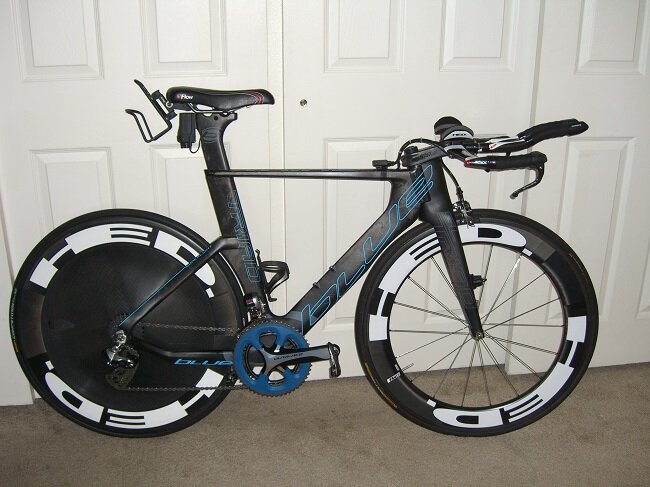 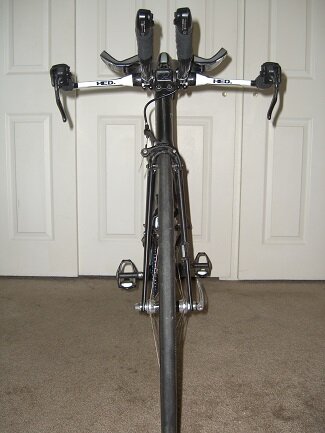 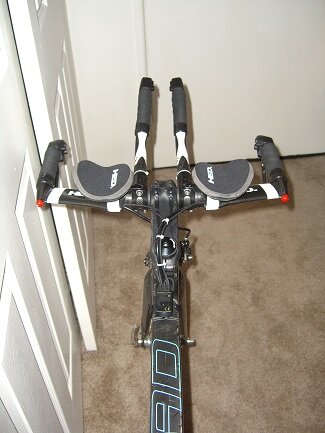 Who needs PEDs when you can have PEWs (Performance Enhancing Wheels). Here I'm racing with a HED Stinger 7 front wheel and HED Stinger Disc rear. This year I've pimped out these wheels by having full ceramic bearings from CeramicSpeed installed in the hubs. I didn't stop there. Rather than a standard lube in the hubs, Atomic High Performance replaced the stock bearing lubricant with their super low friction lube. It is much less viscus than standard bearing lube and it additionally reduces the friction in the bearings.

I use tublar wheels rather than clinchers. I know a lot of folks are moving towards clinchers for racing as clincher technology has improved, but I'm just kind of old-school when if comes to tubulars. I race on Continental Competition tires. I spoke with my experts at HED Cycling and that's what they recommended. I've always loved that tire. There's been research done on the rolling resistance of different tires. There are tires out there with supposedly lower rolling resistance than those I use. This is because they use a softer or more supple rubber and latex inner tubes. In my personal experience the softer rubber on those tires aren't as durable. They knick, cut, and puncture easier. So in my opinion, nothing is slower than a FLAT. Also the other tires use latex inner tubes which lose air pressure over the day. Tire pressure also plays into rolling resistance. If I were to race a 1 hour time trial where I can pump up my tires, ride an hour as hard as I can and be done, I'd consider using other tires. For Ironman, we pump up our tires at 5:00am, then are not on our bikes until about 8:00am, and off the bike around 12:30pm. That's 7.5 hours and the latex tubes would lose pressure in that time. This is why I stick with Continental Competitions. 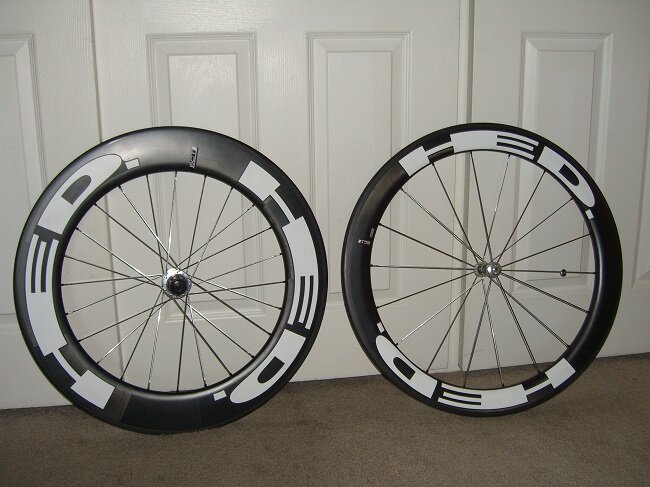 When I go to races where either rear discs are not allowed or not advantageous for the course like Ironman Cozumel, Kona, or St. Croix 70.3 I ride wheels with less deep rims. I choose the HED Stinger 6 front and HED Stinger 9 rear. Atomic High Performance has also put their high performance lube in the bearings to lower the bearing friction. I've stuck with traditional bearings in these wheels because 90% of my racing is on the Stinger 7 and Disc combo. I had to draw a line on my budget somewhere, so I didn't go with full ceramic bearings on this wheel set. 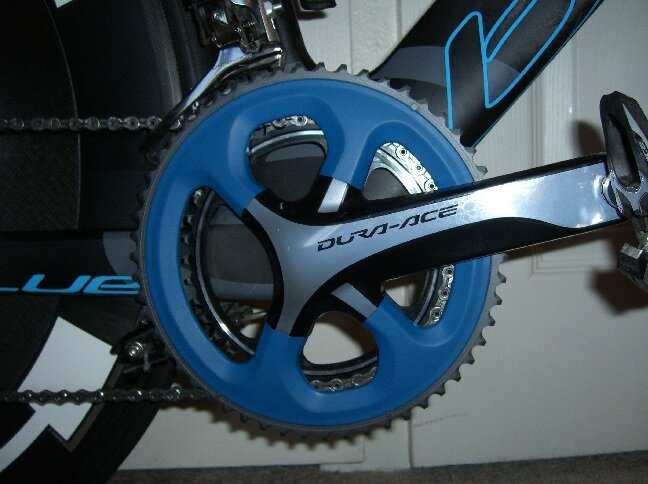 Crank: I'm riding Shimano Dura Ace 9000 crank with 170mm crank arms. I've always ridden 172.5mm cranks, but this season, I've switched to shorted cranks. It's taken me about a month to fully adapt to the 170mm cranks, but now I really like them. Over the winter, I worked with Ivan O'Gorman at Retul on my bike fit. We raised my saddle by about 4-5mm. It took me a while to adapt to that change. When I put these cranks on, I had to raise the saddle 2.5mm to accommodate for the shorted crank-length. So my saddle is about 7-8mm higher than it was last season. Couple this with the crank being 2.5mm shorter at the top of the pedal stroke, I have a much more open hip angle and can engage my quads quicker over the top of the pedal stroke now. Going shorter does reduce the amount of torque you have because you've reduced your lever arm. But I've made up for that by increasing my pedaling cadence at a slightly easier gear. Previously I pedaled at 80-85 cadence for tempo efforts. Now I pedal at more like 85-88. Even though I'm pedaling with a higher cadence, my heart rate isn't higher because with the shorter crank length, your foot is actually traveling slower at a given cadence than with a longer crank. According to John Cobb from Cobb Cycling, it's this foot speed that actually affects the your cardiac output. It's like the old playground game “crack the whip”, the kids on the outside are traveling faster than the kids closer to the center. The whole line of kids are moving the same revolutions per minute, but its much easier for the kids closer to the center. Thus, shorter cranks make it easier to increase your cadence without raising your heart rate, compensating for the loss of torque.

I'm riding a 54 tooth big chain ring and a 39 tooth small ring. This gives me bigger gears to keep pushing downhills but also a small enough little ring to still climb the steeps. Atomic High Performance has coated my racing big chain ring with a low friction coating. This year Atomic also has the capability of adding color. I thought the custom blue to match my Blue would be cool. For races, Atomic High Performance also specially coats my chains with their low-friction lubricant. This is a major advantage over traditional chain oils and lubricants. 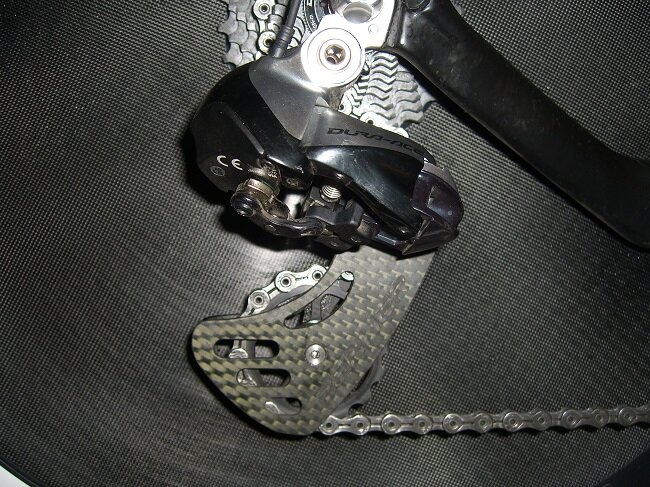 My purchasing splurge this year was buying a Berner rear derailleur. The Berner is one of the best and worst kept secrets in pro cycling and triathlon. They're made in Germany and you'll see them on the time trial bikes in the Tour. No one advertises that they have them, you'll just see them on their bikes. The pulleys on a standard rear derailleur have 11 teeth. The Berner uses oversized pulleys of 13 and 15 teeth. Studies have shown there is a couple watt savings because the chain doesn't have to articulate as much going around the larger wheels. Also, the larger wheels spin slower producing less friction. I also had CeramicSpeed ceramic pulleys put in for races only, further reducing the drive train friction on the pulleys. 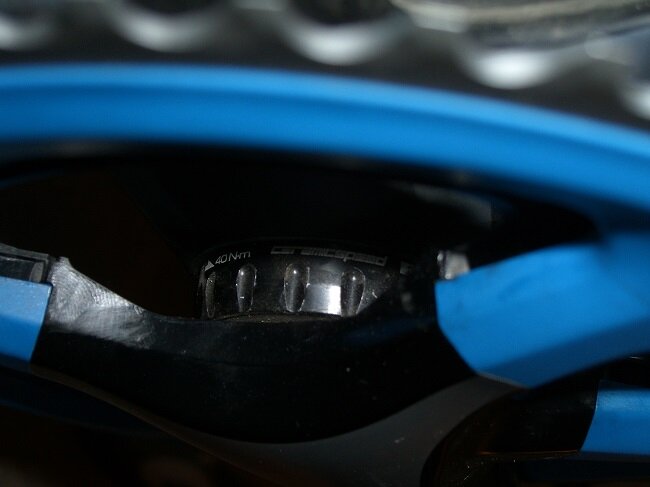 I had a CeramicSpeed full ceramic bottom bracket intalled. Additionally, Atomic High Performance replaced the standard lubricant with their Atomic lube, with a much lower viscosity and friction. I'll have to have the bottom bracket serviced a little more often with the thinner lube, but the friction reduction is well worth it! If you think I'm full of hot air, watch the video below I took of my spinning crank when I was replacing my chain today. 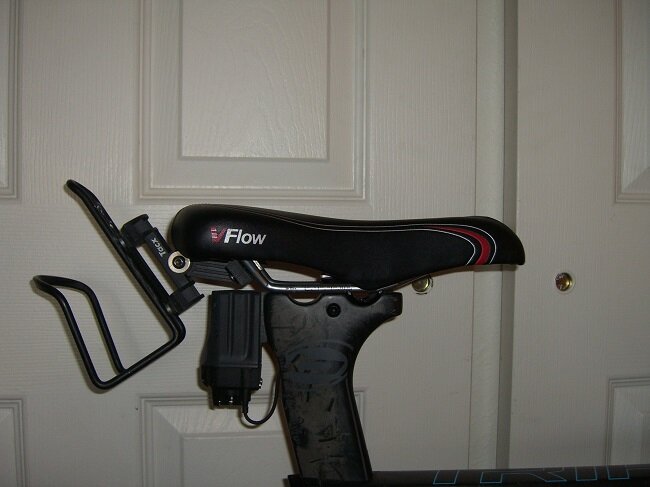 I'm riding the Cobb Cycling V-Flow saddle. I've been riding this saddle for years. I tested a few of Cobb's other saddle offerings this winter, but I kept coming back to this saddle. That's the great thing about Cobb Cycling, they have so many different saddle offerings, everyone can find the saddle that works with them. My goal is to lower my aerobars and front end soon. At that time, my position will change a bit and who knows, maybe a different Cobb saddle will be perfect for me then. For now, I'll stick with my V-Flow. 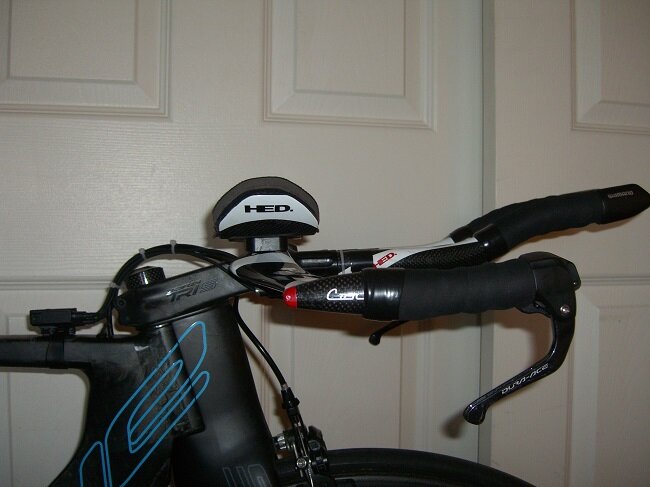 On my front end, I'm using the HED Corsair bars with the S-bend extensions. All Blue Triad bikes come with their Aerus bars. This is a special stem that allows me to run the HED bars on this bike. As you can see, the front end is as low as it can go with this special stem in terms of stack height (which happens to be the exact same height I was previously riding).. My goal is to lower my front end an additional centimeter, but I won't be able to go lower how I've set it up now. The Aerus bars have a more neutral slope as opposed to the up-slope on this stem. I had my mechanic leave an extra cm of steer tube up because when I put the Aerus bar on, in order to go lower for my bars, I'll actually have to add spacers beneath the stem from where I have it now. I know it sounds confusing, but trust me on it. I'm not trying to look like a muppet with steer-tube showing, there's method to my madness!

So that's how I have my Blue Triad SL set up so far this season. My next possible upgrade is a TriRig front brake but honestly I feel like I'm splitting hairs there to eliminate the front brake cable sticking out. Other than that and the possible front end change to get a little lower, this is how I've pimp'd my ride for 2014.

I'd like to thank those companies who have helped me to build this mean machine. Without their help, I'd be riding a 50 lb steel frame mountain bike with playing cards in the spokes! Thank you Blue Bicycles, HED Cycling, Jack and Adams Bicycles, Atomic High Performance, Cobb Cycling, and CeramicSpeed!