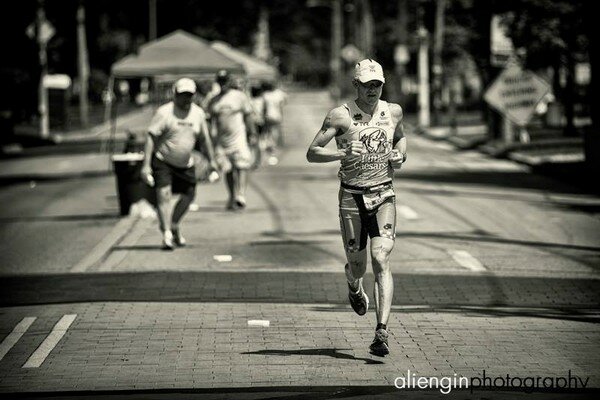 I was very happy to finish Ironman Louisville in 2nd place. After a rough few months, I felt like I had myself back on track. I am very happy for Chris McDonald for his win. Chris is one of my closest buddies, so even though I obviously want to win, it was great to see Chris race like a true champ. He broke both the bike course record and the overall course record. I was happy with my overall performance. Of course I always want to go faster in each discipline and quicker overall, but honestly, I was happy with my time of 8:34. Getting back into the 8:30's has made me feel much better than I'd been over the last few months. Now with a 2nd at Ironman Australia and a 2nd here at Louisville, I feel like I can already call this a good season. 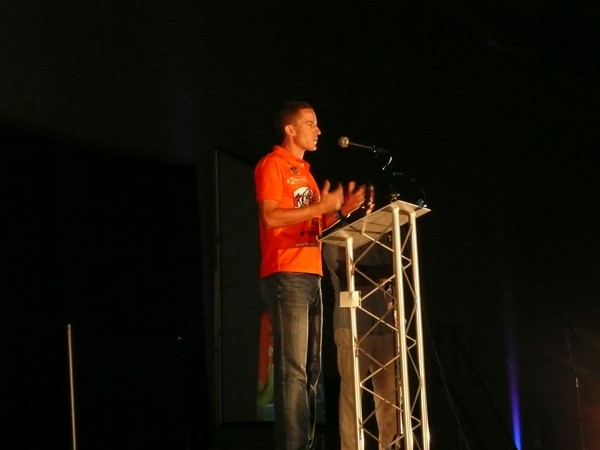 Speaking at the Athlete Welcome Banquet, two days before the race 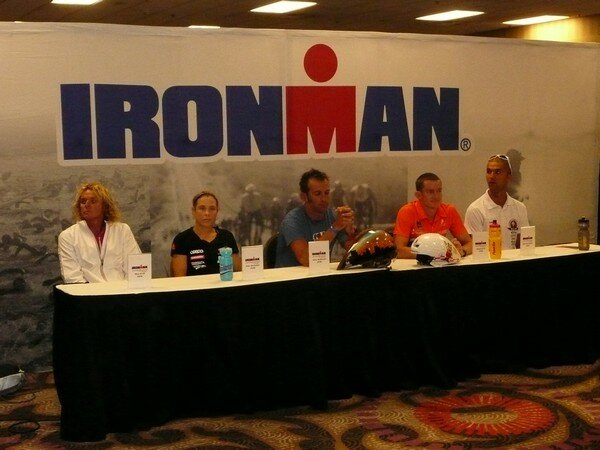 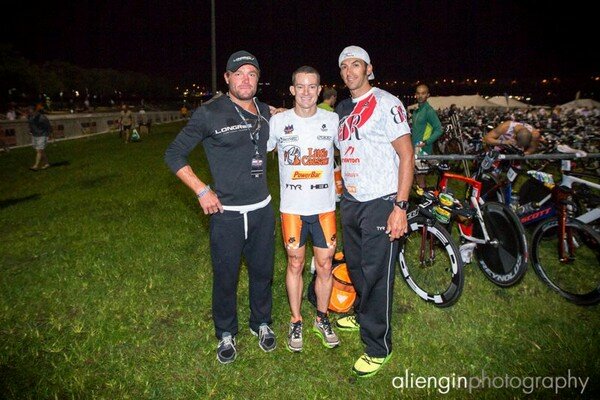 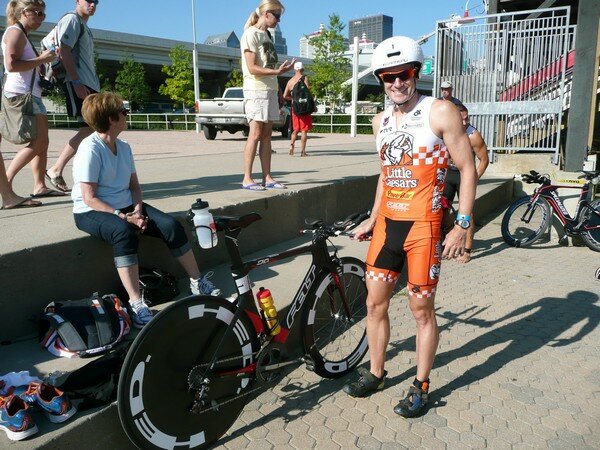 Warm up sessions the day before the race 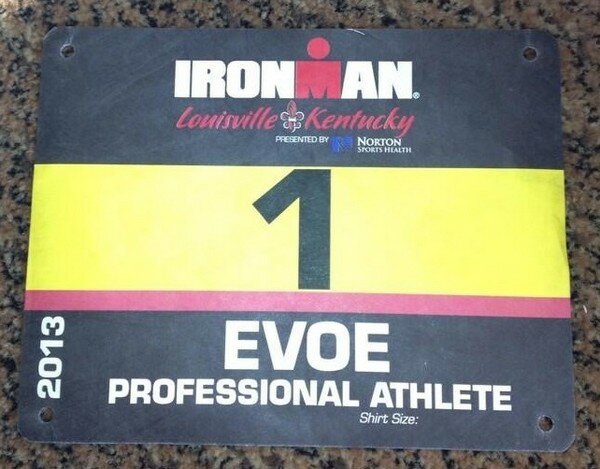 My first time wearing the #1 at an Ironman, it was a fun honor to defend the title

The swim was fast this year, where last year it'd been a couple minutes slow. I exited the water in 51:30, time wise, that would be my best swim ever, but after looking at all of the swim times across the board, it looks like the swim course was a little on the short side or maybe the current on the downstream section was pushing harder than last year. Still, I was happy with my swim. I was hoping to swim closer to Chris, even exit the water with him, but going through transition, my family told me I was three minutes down on him. If I'd been 2 minutes or less, my original plan had been to try my best to push hard early on the bike an bridge up to Chris. As it turns out, even if I'd been closer on the swim, Chris was on top form right from the get go and I wouldn't have been able to stay with him had I wanted on the bike. Every time we saw Chris or got a split from a spectator, his gap was opening further and further. 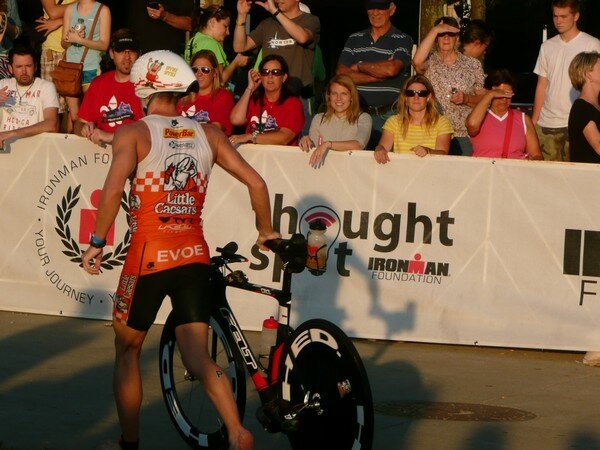 As I got the splits on the bike, even though I know that Ironman is a long day and anything can happen, I felt like I was racing for 2nd place. On the bike, I linked up with Thomas Gerlach. We seemed to be riding about the same pace so rode together the whole ride. A few guys tried to tag along for a while as we passed them, but Thomas and I started the ride together and ended the ride together. I didn't feel spectacular on the bike. I felt like I could ride an overall pretty solid steady pace, but I didn't feel that I had any true punch. I wasn't worried, I just noticed that I didn't feel like I could accelerate as needed. Not a big deal. I ended the bike with a 4:36 bike split, 3 minutes slower than last year, but two minutes faster than 2011. I think we lost at least a couple minutes on the course messing around with age-groupers on the second loop of the bike. The congestion was really bad this year and we spent a lot of time and energy slowing down, speeding up, and weaving around the age groupers. I found myself sitting up and easy pedaling quite a bit on that 40 mile section of the race. It was pretty frustrating, but I really couldn't do anything about it. We were all affected in the same way. Getting off the bike, Thomas and I were together in 2nd and 3rd place. Placement wise, that was a great place to start the run. Time-wise, we were around 10 minutes back from Chris. I knew at that point, unless Chris had totally overcooked himself on the bike. This was a race for 2nd. 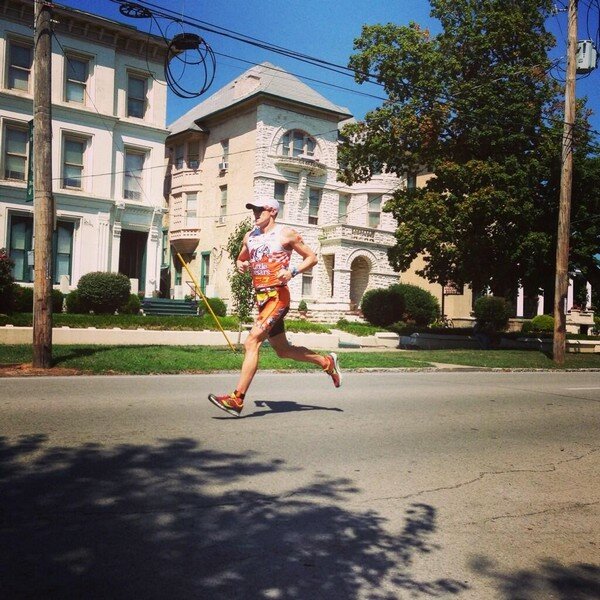 On the run course, that heal strike is back in full force, I'm working on that now! 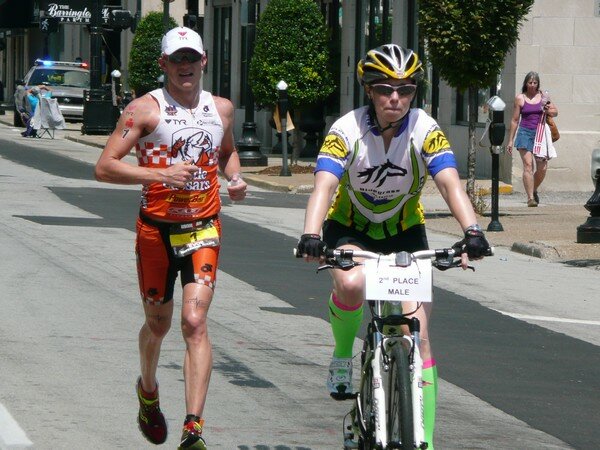 Out on the run, it was getting hot. 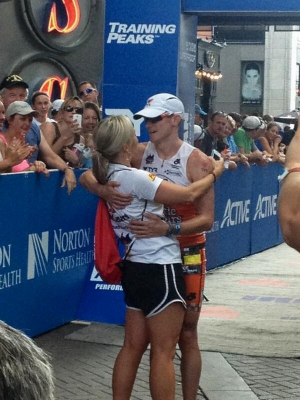 I didn't run as if I was racing for 2nd, you never know what will happen. But because Chris and I are close friends and we know how each other train and race, I know Chris is very strong. He doesn't really slow down and he doesn't often blow up. I felt really good for the first 18 or 20 miles of the run, holding a strong pace. My legs and lungs felt good, I felt that as always in Louisville, the heat was more the limiter of my running.

Every time I saw Chris or got a time split to him, it was exactly the same. He and I were even splitting each other, running the exact same pace. I was pulling away from 3rd and 4th at a good clip. At the last turn-around, about mile 21, I was still 10 minutes behind Chris, and Thomas was around 9 minutes back in 3rd. At that point, it was pretty hard to dig deep. The race fatigue was setting in, my quads were shot from my heal-striking on the run (which I'm back to working on again), I wasn't going to catch Chris unless he walked, and as long as I didn't walk, 3rd place wasn't going to catch me. At that point, from mile 21-26, I went into cruise mode. I didn't dig, but I didn't totally give up. I lost probably about 45 sec/mile off my pace, but I knew places 1-2-3 were pretty much locked in. Those last few miles are always really painful, but if felt great to cross the finish line in 2nd again.

It was really nice to have my wife, Megan great me at the finish. Chris also waited for me. We were both happy for each other. Hats off to Chris, he had his best race in years. I wish I could have pushed him more and put pressure on him, but I was happy with my day. Ironman Louisville is a great race, it holds a special place for me, now with finishes of 1st, 2nd, 2nd, 4th, 5th. 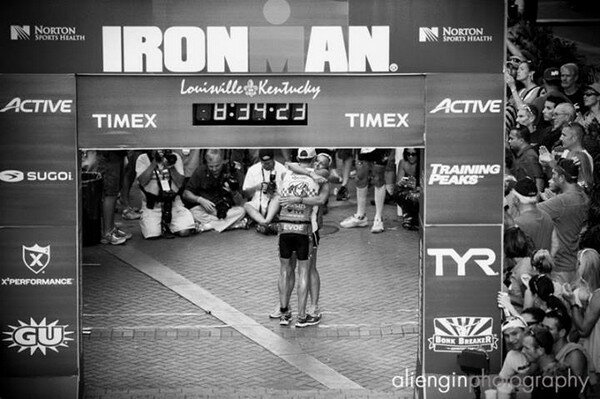 Megan waits at the finish for me. Photo by Ali Engin 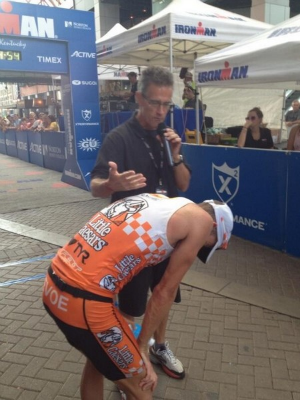 Even though I've had some rough patches over the last couple years, after this race, looking back 2 years to August of 2011, since then I've had a 1st and 4 x 2nd place finishes at full-Ironmans. I can't be disappointed with those kinds of results. Since the race, I've had a couple weeks of recovery and have started getting back into good training.

The Boulder floods have now presented challenges of their own for all athletes in the areas. The damage here has been terrible for all of the families in the flood areas. The most important thing for us to remember is for those who have lost or had damage to their Newest Online Casinos with No Deposit Bonusess. There are many Newest Online Casinos with No Deposit Bonusesless refugees in the Rockie's front range area. From the athlete's standpoint, most roads for biking are torn up or closed. Every running trail, park, and many roads good for running are closed or damaged. Our pool is closed as well. Proper training is a challenge now, but compared to the damage that many people's lives have sustained in the floods, it's a small price for us to flex our training around.

Up next for me is Ironman 70.3 Augusta in 2 weeks, then Ironman Florida five weeks following. My recovery seems to be going well and I'm excited for my last couple races of the season. I haven't been to Ironman Florida since 2007, so I'm looking to do something special there. When I went in 2007, I got sick two days before the race. I started the swim, then dropped out. I've always wanted to go back and see what I can do on that course. I've raced Ironman Cozumel the last 4 years, so I wanted a little change this year in the race schedule. I'd grown tired of the Ironman Texas, Louisville, Cozumel schedule, so swapping out Australia and Florida for Texas and Cozumel offered me some fun and needed variation for this season.

I want to thank Little Caesars Pizza for their support of me and my racing. Their belief in me is so important for me be able to do what I'm doing in this sport. TYR Sports is providing me with the best wetsuits and speedsuits in the sport. PowerBar's nutrition products have been a key part in my training and racing. I'd also like to thank RecoveryPump for their support. RecoveryPump has been a critical aspect of my training and recovery and I truely believe the product has helped to take my training to the next level. Jack and Adam's Bicycles in Austin are always there to help support me and my racing. I want to thank Felt Bicycles for putting me on such an amazing bike, the Felt DA. HED Cycling has provided me with the best wheels and aerobars on the market. Champion System Clothing has provided me with the race and training clothing that you see in my pictures. Brooks Airbrush Studio painted up my amazing aerohelmet this year. Atomic High Performance has coated my bicycle drive train with high performance low-friction coatings. Hill Country Running Company is a great help with my running equipment. SBR Sports Inc's products are also a great help for racing and training. Coach Brackin at Brackin Elite Swim Training has helped bring my swimming up to the next level. Also I want to thank my family and friends for their unending support for me. Without these people and sponsors, I would not be able to pursue this dream. 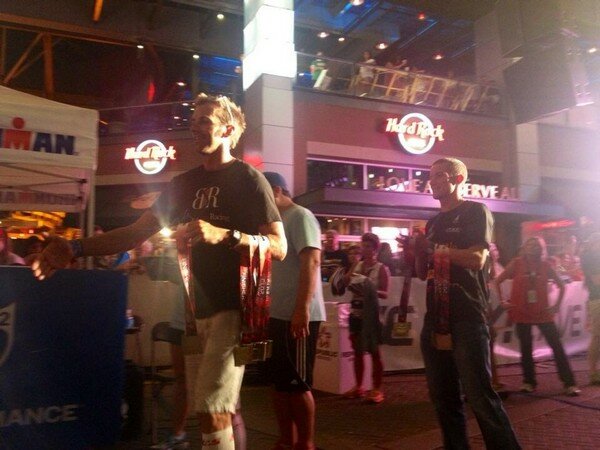 Chris and I went back to the finishline for the final finishers from 11pm - midnight. There is not a more positive energy environment than the finishline of an Ironman close to midnight!