My race at Ironman 70.3 San Juan didn't really turn out as I had wanted or expected. I finished in 19th place which was far off of my top-10 goal for my opening race of the year. For the first time in over 60 Ironman and Ironman 70.3 races, I actually went off course on the run, costing me a lot of time and taking me out of any kind of contention in the race. I walked away from the race just plain angry. After a few hours, the anger subsided and looking at the race objectively, there were a few good things that came out of the weekend. I'm posting this race report a couple weeks later than I usual for race reports because on March 23, Megan and I were married. I came Newest Online Casinos with No Deposit Bonuses from the race and spent the next preparing for the wedding. Since then, I've been focused on recovering from the wedding/race combo and getting my training back on track. Back to talking about San Juan.

First, this is the earliest I've raced since 2009. In 2010, 11, and 12 I didn't race until mid-late april, so this was a good early season fitness check. While it seems that many athletes these days are in full-on summer race shape all year round, I actually need the winter and spring to build up my fitness for the coming year. So racing a full month early, I felt like my overall fitness was in a good place. My swimming fitness was very good. My bike fitness felt great. I spent more time in the gym this winter on weights for leg strength than I have before. I noticed that I felt like I had good bike strength. My run (minus the extra distance I ran), was so-so. My run fitness wasn't bad, but I didn't have the pop in my legs I have when I'm fully fit. I had a running injury in January and took 3 weeks off of running, so having 5-6 weeks of running in my legs after that running break, I wasn't totally disappointed in my run, but I could tell that I haven't put in enough fast and tempo miles yet to really have that next gear off the bike in a race. A few more weeks of good sessions, with proper long runs, speed sessions, and tempo runs and I'll be back on top of my running game. That said, I didn't run terrible in the race. If I take out my "excursion" time, my run was okay.

I really enjoyed the race in San Juan. I'd go back to this race in a heart beat. The swim was in a protected lagoon which made for calm water, except for the last 300 meters shooting out of the inlet and across a bay to the exit where there were significant currents. The bike course was flat and fast. It rained for most of the bike ride, but other than 3x 180 degree turns on the course, it wasn't technical. It was a put your head down and ride, kind of course. The run course was tough but scenic. I'd say it was comparable to St. Croix in difficulty on the run. I did like that the course went through Old San Juan and by the old forts. Overall, I'd give the course an A.

I had a pretty good swim. I was hoping for a better swim time relative to the leaders because of the times I'd been swimming in practice, but I made a couple tactical errors early on that I think cost me a little. Now that I'm a better swimmer, I actually have choices to make during the race. My swim fitness was there. In the coming weeks, I'll add some longer continuous swims, as I felt like that was one area I felt lacked a little. We've been swimming lots of 100s in practice, but not as many longer sets to keep the arms turning over for longer periods of time.

Getting on the bike, I felt pretty good. I started catching guys in front of me right away. I could tell my legs felt solid. After about 8 miles, I caught Michael Lovato. We rode together the rest of the bike. I liked riding with Michael. He rode fair and did work on the front. The two of us proceeded to catch about 15 guys. Michael and I came off the bike together pulling a long line of guys who were happy to sit in back and catch a free ride. Several guys took off right away out of transition. I've always found that after flat bike courses, it takes my running legs a little longer to come around than after hilly bikes. Staying in the aeroposition without much movement is much tougher on the quads.

Michael and I ran together for the first couple miles. As we went along the water past the forts, he slowed up a bit so I went ahead a little alone. I'm not sure what place we were in, somewhere around 13th I think. My legs were coming around and I was starting to run pretty well. Not fast, but not bad. On the way back into town, I was running uphill. I couldn't see the guy in front of me. After a few minutes, the road I was on dead-ended into a field. I stopped, I was so confused. I didn't know where the course was. I stood there looking around yelling "where's the course?" to really no one in particular. I looked up a hill and in the distance, I could see the course and guys who were minutes behind me were quickly passing by. I realized I had somewho run off course. At that moment, I knew my race was done. In a field of almost 50 guys, you can't make a mistake like that and expect a good placement. I was so mad. I ran back down the road and to fork where I had gone off course. There had been no markings on the road and I had ran past 2 police officers who hadn't said a word to me. They just let me run off course. I couldn't believe there were no arrows on the ground, cones, etc, and the police guarding the intersection just let me run down the wrong road. I take full responsibility because I know it's the athlete's job to know the course. 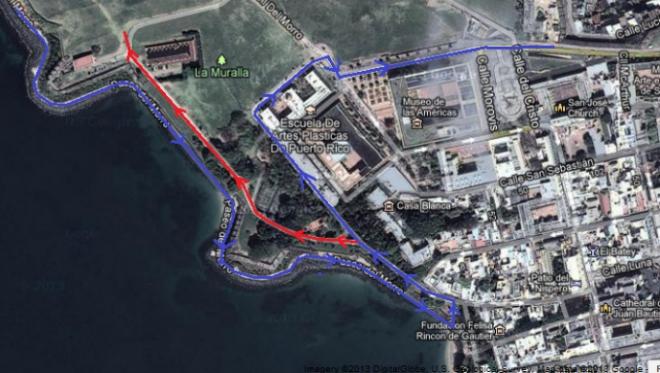 Above is a map of the run course (noted in blue). The red line is where I ran off course. At the end of the line, I stopped, figured out what happend, turned around, and ran back to where I came out on the course again.

When I came back to the course, I had dropped from about 13th place to about 22nd place. It took all of the wind out of my sails. I still tried to run hard, but honestly, it was hard to dig deep to fight for 19th place. I was so mad at myself. The mistake cost me around 3:30. I ran over a 1/2 mile extra as well as the time I was standing trying to find the course. On the second loop of the run, I wanted to see how I had messed up, but by then, the race had put traffic cones up across the fork so no one else would go off course like I did.

I finished the race in 19th place, a far cry from my expectations for that race. I've never been so mad at the end of a race. I went straight back to the hotel and didn't take part in any post-race festivities. After a couple hours, I had let it go and was in a better mood. I'm past that race. Not the way I intended to start my season, but you bounce back and get ready for the next race. There's a lot of 2013 ahead!

I really want to thank Little Caesars Pizza for their support of me and my racing. Their belief in me is so important for me be able to do what I'm doing in this sport. TYR Sports is providing me with the best wetsuits and speedsuits in the sport. PowerBar's nutrition products have been a key part in my training and racing. I'd also like to thank RecoveryPump for their support. RecoveryPump has been a critical aspect of my training and recovery and I truely believe the product has helped to take my training to the next level. Jack and Adam's Bicycles in Austin are always there to help support me and my racing. I want to thank Felt Bicycles for putting me on such an amazing bike, the 2012 Felt DA. HED Cycling has provided me with the best wheels and aerobars on the market. Champion System Clothing has provided me with the race and training clothing that you see in my pictures. Brooks Airbrush Studio painted up my amazing aerohelmet this year. Advanced Rehabilitation in Austin helps to keep me healthy for training and racing. Hill Country Running Company is a great help with my running equipment. SBR Sports Inc's products are also a great help for racing and training. Also I want to thank my family and friends for their unending support for me. Without these people and sponsors, I would not be able to pursue this dream.