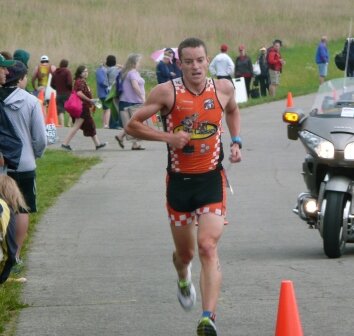 I was really happy overall with my entrance back into half-Ironman (Ironman 70.3) racing last weekend at Kansas Ironman 70.3 in Lawrence. It had been a year since my last Ironman 70.3 and my previous four big races were all full-Ironman races. So going back to the "shorter" races was a bit of a shock to my system. I was really happy with how the day turned out and truly enjoyed the course and Lawrence. I finished 9th place overall with a time or 4:02 and race a personal best 1:16 half-marathon off the bike. After a rough start, I got stronger as the day went on.

When I was setting up my 2009 race schedule, I decided to have a half-Ironman block of training and racing after my spring Asian Ironmans in order to focus on my speed for a couple months. Kansas 70.3 was my first in a series of 3 half-Ironmans I'm racing in June and July, so I was happy to start off the series strong. From here I'm racing Buffalo Springs Ironman 70.3 in Lubbock, Tx next weekend and then to Ironman 70.3 Rhode Island two weeks later. I'm hoping I can improve on my racing at each one, then use my speed gains to sling-shot me into my Ironman Wisconsin training in July and August.

I had never been to Lawrence, Kansas or the state of Kansas at all for that matter. I do have to say that I really liked the town of Lawrence. It is a nice sized college town with a cool downtown area of shops, restaurants, and bars (and ice cream places which we sampled after the race).

I was surprised at how challenging the bike course was at the race. The swim was in Clinton Lake which was calm on race morning. It was about 71.5 degrees so it was border-line wetsuit-legal for pros, with the final verdict that we could use them on race morning. The bike course was much hillier than one would imagine in Kansas. You would expect a flat and windy course in Kansas, picturing the tornado scene from the Wizard of Oz. Well, they found the most hilly part of the state. It was still pretty windy out there. Some of the trees had grown partially sideways from the continuous winds. I found the challenge of the bike course made it easy to keep focus through the entire race. There weren't any long boring stretches of road where your mind could wander. The run course wound through the state park and its campground. The run was pretty flat with the exception of one modest hill we ran up twice. Again, I thought it was easy to keep focus on the run because the winding camp roads with 6 out-n-backs to see your competition gave you a lot to focus on throughout the run. 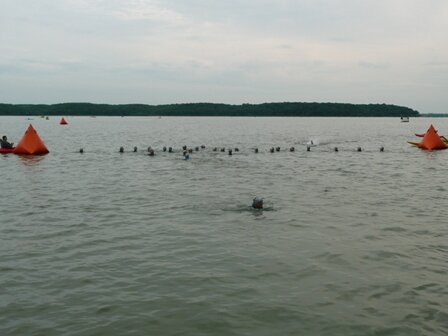 Male pros line up for the swim start

I was really disappointed with my swim. I had really been working hard on my swim all winter, spring, and leading up to this race and I swam the exact same time as the previous 3 years and was down the same amount of time to the lead group as last year. In the full-Ironman, there's enough real estate to make up for a swim gap, but in a half-Ironman it's that much more difficult. I was not happy exiting the water. I had been caught and passed in the water by some of the lead women pros who had started 2 minutes behind the men. Rest assured, I've been continuing to work hard on my swim leading into Lubbock next weekend. I haven't missed a day of swimming since the race! 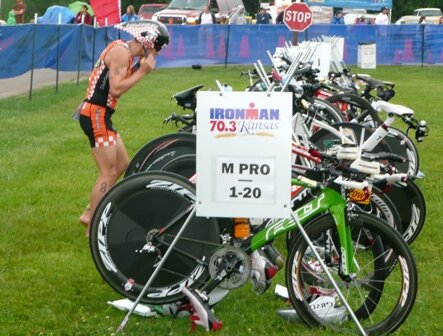 I was satisfied with my bike. I felt pretty strong through the first 75% of the ride. The last bit I didn't have as much punch as I wanted, but still rode strong. I pushed hard at the beginning to make up time after the swim and it may have caught up with me at the end of the bike. I had also put in a huge 5-week intensity block on the bike leading up to about 6 days before the race, so my legs may have not entirely recovered from the work I had put in. I was happy with my bike and made up about 10 places by the time I entered the second transition. 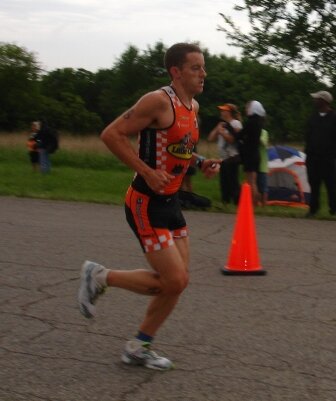 I think I was about the 25th out of the water and came off the bike in 15th or 16th place. My focus then was to try to run my way into the top-10. Realistically, my swim had taken me out of top-5 contention from the start gun, so my focus was to get into the top-10. I started the run and despite pushing hard and suffering the last 5-10 miles of the bike, my running legs felt really good. I had put in a lot of work over the weeks previous to the race to be able to run HARD off the bike. When full-Ironman training, it's easy to fall into a routine of teaching your body to run at a reasonable and comfortable marathon-pace off the bike. For 70.3 races, it's a whole different gear and suffer factor to be competitive running off the bike, so I had really worked hard in this area over the last month.

My work paid off. The first mile felt great and my pace was faster than I expected. Mile 2 was a bit rough. I didn't feel too good, got some side stitches, and my back was aching pretty bad. I was surprised that my pace didn't fall all that much though. By mile 3, those problems from the previous mile were gone and I felt really solid. The rest of the run I felt steady and strong. I reeled in about 8 guys over the 13 miles. I actually ran a faster second half of the run than the first and didn't fade at all in the last miles. I was really happy to turn in my best run yet in a half-Ironman.

My recovery has gone really well. I actually was able to get back into training after a couple easy days. I pushed hard for about 4-5 days late last week and over this last weekend, so now I can start tapering down for Lubbock. I really feel that I will put in an even stronger performance in Lubbock. Forecast is for 96 degrees on race day, so that's good. It's been pretty cool there over the last couple years and the boys from Colorado who come down to race haven't learned what Texas summer heat is really like. That bodes well for us from Austin. It's 102 degrees here today and humid. 96 and dry will feel cold! More to come from Lubbock next week.

I would like to thank Little Caesars Pizza for their belief in me and my racing as well as their support. I’d also like to thank Jack and Adam’s Bicycles for their endless assistance. I’d also like to thank Xterra Wetsuits, Advanced Rehabilitation, Hill Country Running Company, and Lewis Signs. I want to thank my parents for their unending support. Having them in Kansas really made the trip for me. Without the support of my family and friends and sponsors, it would not be possible for me to continue my pursuit of racing; I am appreciative of their unending support and encouragement.